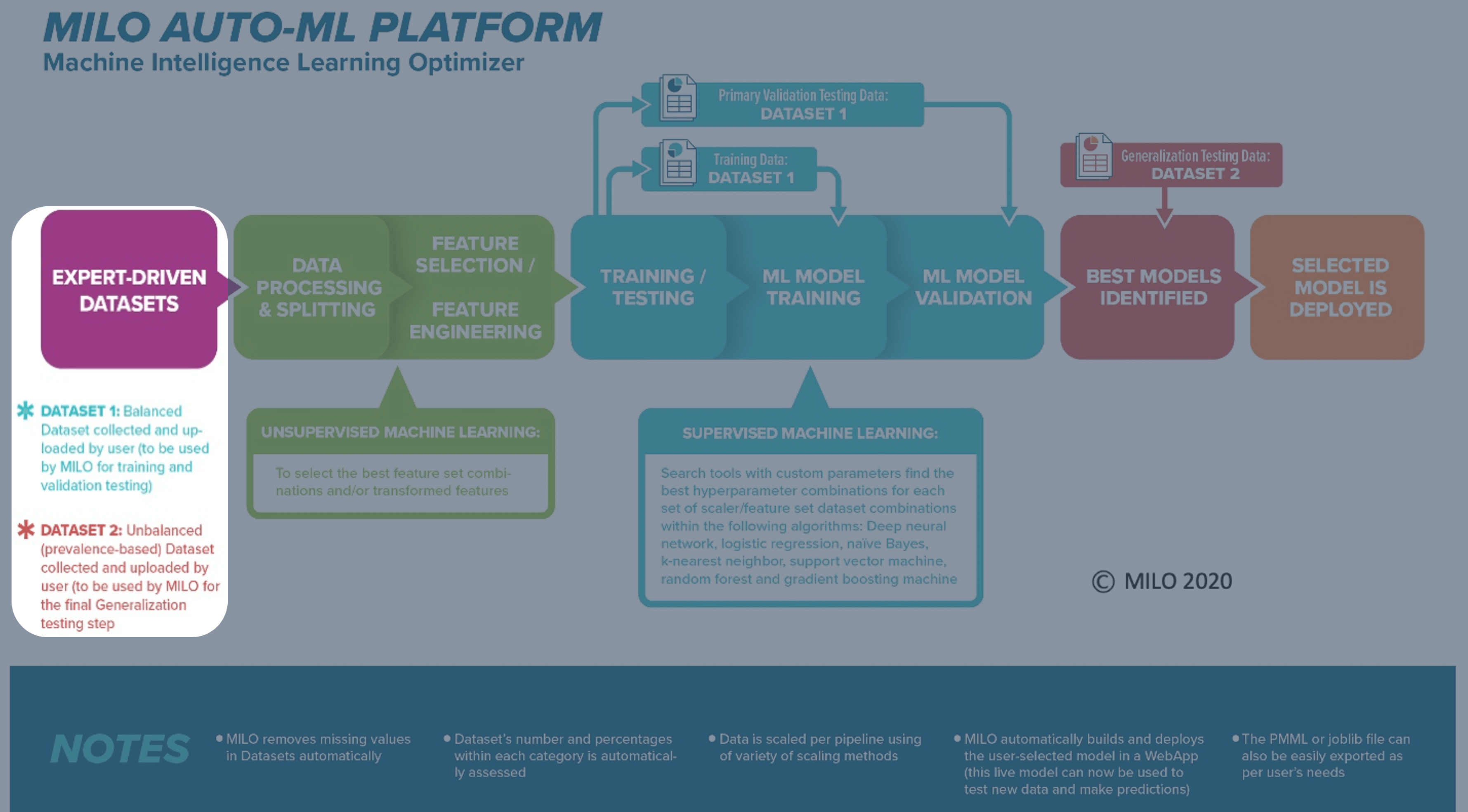 Data can come in all types, shapes and sizes (numbers, images, texts), however in order for your data to be used within MILO-ML, it needs to be first structured in a specific way so that it is compatible with MILO-ML.

The data "type" compatible within MILO-ML needs to be in the form of a numerical dataset (non-image and non-text). If the dataset includes text (e.g., Yes vs No or Male vs Female, etc.), that text will first need to be converted into a numerical value so that it is MILO-ML-compatible (e.g., 1 for Yes vs 0 for No or 1 for Male vs 0 for Female, etc.).

The data "shape" compatible within MILO-ML is also very important and needs to be in the form of a csv file (note: these can be easily made within one's Excel dataset file by saving the single Excel sheet as a csv file). The final csv file will need to include a set of features (i.e., variables) and a single binary target (i.e., 0s and 1s as the negative versus positive target, respectively) to map the features to the binary target class [as you recall, MILO-ML is an optimized binary classification (e.g., Cancer versus No-Cancer) Auto-ML software]. Another example (besides the cancer sample datasets that has been provided) of a MILO-ML-compatible data (e.g., Acute kidney Injury (AKI) dataset) is shown below with its features being represented in the columns "NGAL", "Urine-output", and "Cr-serum" while its target column representing the cases that are AKI positive (i.e., 1) versus AKI negative (i.e., 0). Although the AKI datasets are not being provided for your use, the Cancer sample datasets provided here will follow the same rules and formatting guidelines that are shown below within the AKI dataset. This way you will get a better appreciation of both of these datasets at the same time which will hopefully give you a better understanding of the overall data-type and structural compatibilities for your own datasets that you will ultimately use within MILO-ML.

In summary, regardless of the study, the following 3 things are required of the datasets for getting started in MILO-ML:

Please note: the training dataset should preferably be balanced between negative and positive cases of your binary classifier (i.e., target column) while the generalization dataset should be more reflective of the target’s true prevalence.

Also, as mentioned above, one of MILO-ML's strengths is its generalization step which allows each model created and validated in the first building/initial validation step to be secondarily tested with a separate generalization dataset within MILO-ML before becoming available for use. This approach ultimately helps to minimize overfitted models which is one of the most common pitfalls within the ML model building world. Additionally, when dealing with small to intermediate-sized (100s to low 1000s) datasets the overfitting phenomena becomes more pronounced and further demands the need for separate secondary and tertiary generalization test sets. This is because the second (generalization) dataset is not used during the training phase whereas the first (training) dataset is split internally into a train/test split (as noted earlier) and may have become influenced by its own data, further reinforcing the absolute need for the second separate generalization dataset in this process.

As mentioned earlier, MILO-ML uses numerical data only and therefore is not compatible with images, audio, video, graphic, textual or other non-numeric data formats. In some instances, invalid formats can be converted into a numeric representation allowing MILO-ML to function properly. For example, if you have textual data such as "Low", "Medium", and "High" then you could encode these into 1, 2 and 3 respectively (if appropriate).

Additionally, your data might be spread across several databases or spreadsheets and will need to be joined or flattened into a single table since that is what’s needed to generate the MILO-ML-compatible csv file. The result will look something similar to the below spreadsheet: 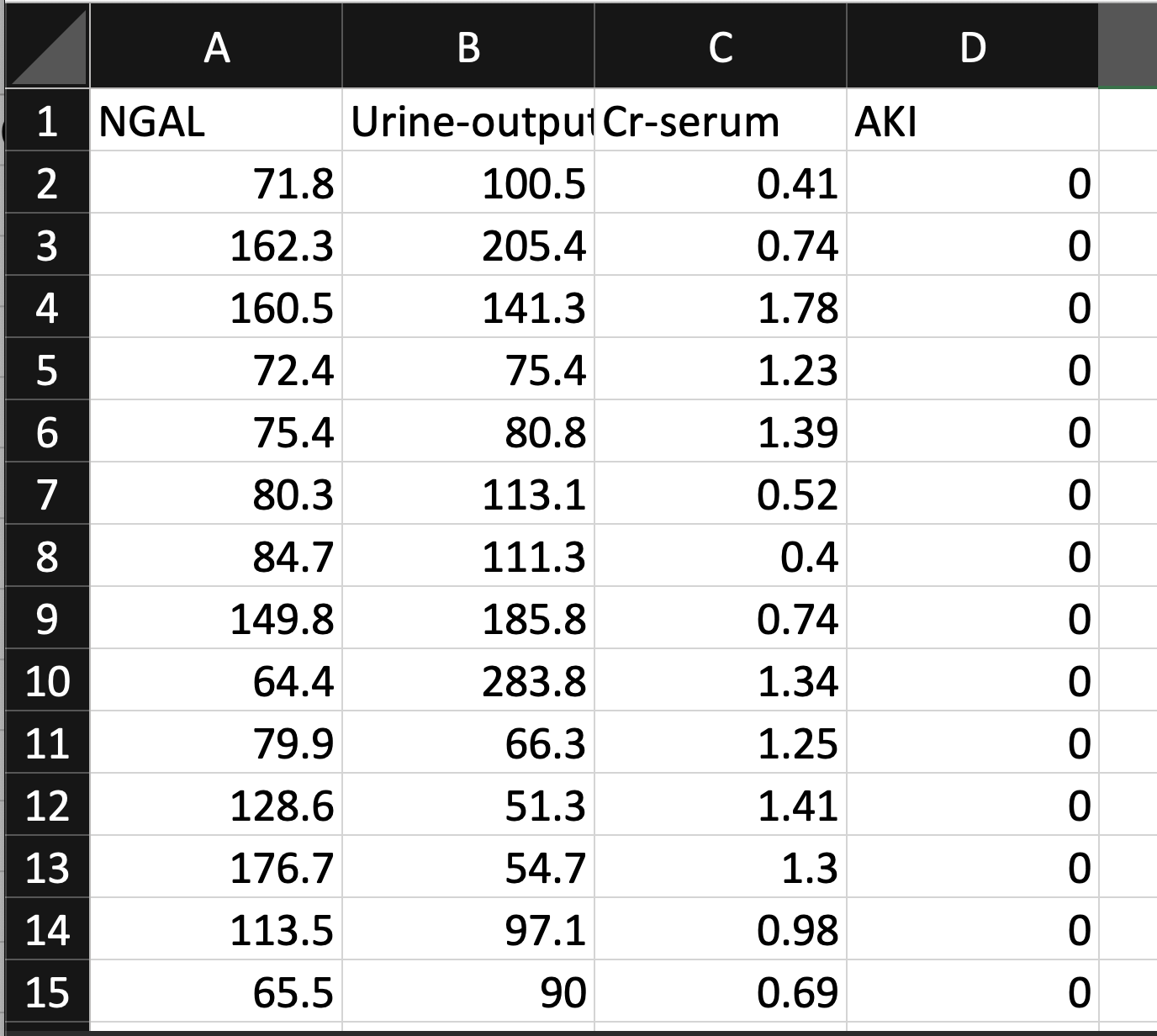 As noted above, once you have gathered your data, you need to select the labeled column that represents your binary target for your model. MILO-ML only allows for binary classification-based models, meaning everything under the target is valued at either 0 or 1 representing states like negative versus positive, not-present versus present, low risk versus high risk, etc. In the case depicted below, AKI is the target and the 0s noted below the AKI target column represent the No-AKI cases for this dataset. Note: the positive AKI cases (not shown below) would be represented as 1s within the csv file.

Note: If you are concurrently evaluating the sample Cancer dataset (which is provided for your convenience), you will notice the last column (i.e., target column) in those csv dataset files are labeled as "Cancer", with the positive cases listed as 1s and the negative cases listed as 0s. 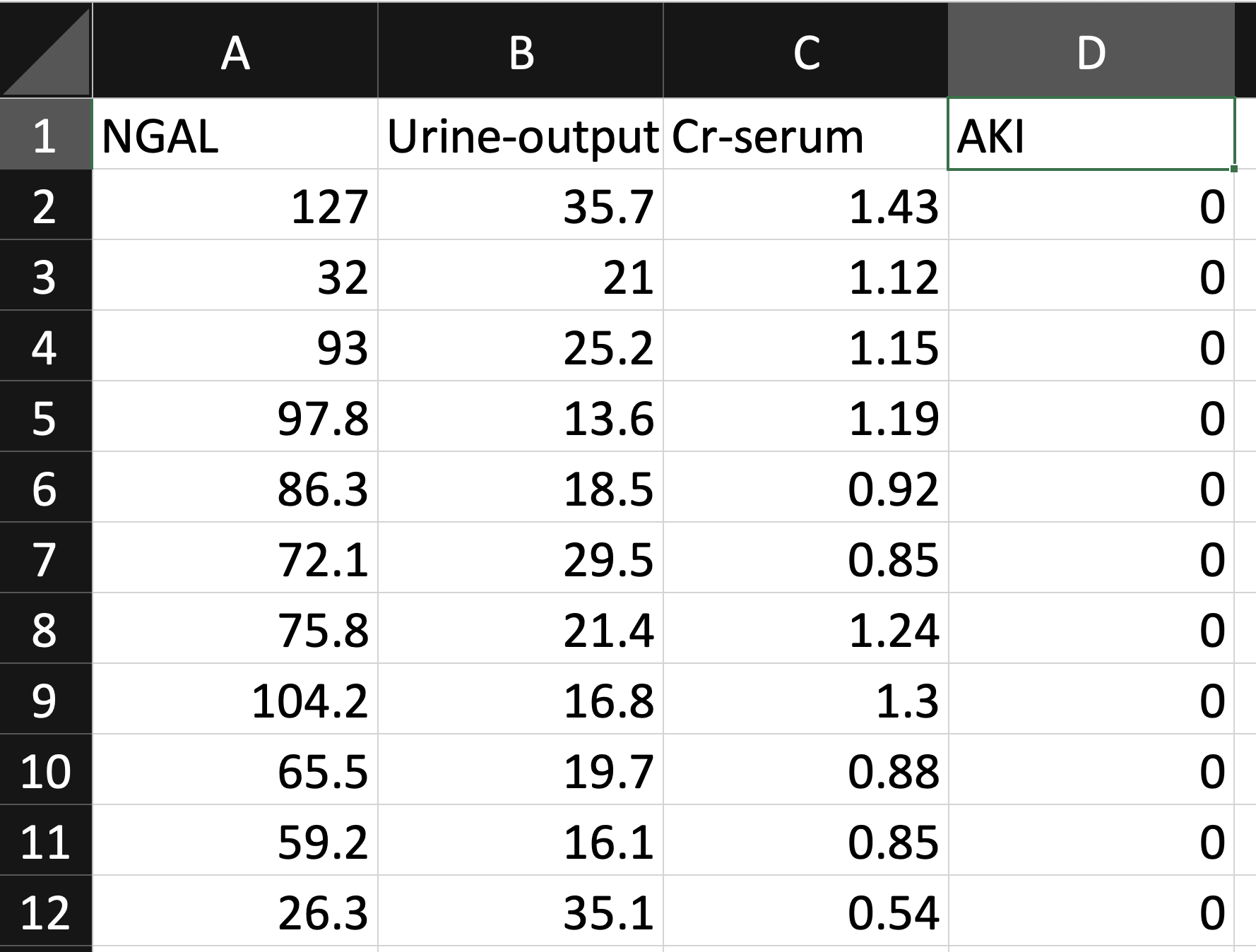 Now that your two required datasets are prepared for a given binary classification problem, you can begin uploading the data into MILO-ML. The next several sections within this guide will walk you through MILO-ML’s aforementioned 4 steps which will ultimately give rise to the ML model of your interest.

If this is your first-time using MILO-ML, we recommend using the sample Cancer dataset (that is provided to you here) for your first MILO-ML test run. Also, for this first test run, we recommend starting with a smaller number of faster algorithms (i.e., Logistic regression and Support vector machine algorithms selected within MILO-ML) so that the build phase can be completed in a much faster pace. This way you can get introduced to the various MILO-ML capabilities in a much more efficient manner and without a hiccup as you go through this guide while getting to know the various analytics tools that MILO-ML can offer during and after each run.

Note: For your future real MILO-ML runs (on your own datasets) we recommend running all algorithms and permutations within MILO-ML to optimize your chance of finding the best performing ML model for your given study. However, those full runs take a while to complete so for the sake of this tutorial, it is best to test with a limited number of simpler algorithms (e.g., Logistic regression and Support vector machine) as noted earlier.

Now that you are familiar with what is required to become a MILO-ML-compatible dataset, let’s start going through MILO-ML.